Welcome to our newly designed viewing room! We are pleased to present George Grosz: Drawings for Esquire Magazine, showcasing a selection of fine illustrations by this inimitable German-American artist.

Drawing for Esquire, November 1937, p. 45, for Bendeit Thielen's story of the same title.

Drawing for Esquire, October 1937, p. 75, for Morley Callaghan's story of the same title. 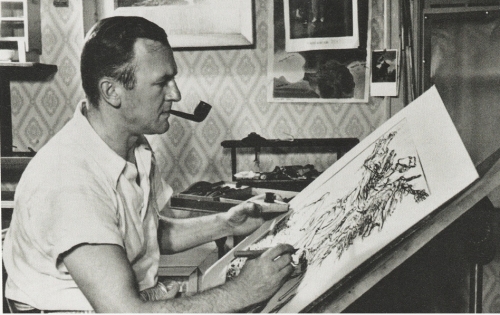 1898 The family moves to Stolp in rural Pomerania.

1901 After his father's death the previous year, Grosz moves with his family back to Berlin.

1902 Returns to Stolp. Reading James Fenimore Cooper's The Last of the Mohicans and The Deerslayer, develops a lifelong enthusiasm for America.

1908 Expelled from school after reciprocating when he is slapped by a teacher. The school's drawing master encourages him to apply to the Königliche Kunstakademie (Royal Academy) in Dresden.

1910 Publication of his first drawing in Ulk, the satirical supplement of the Berliner Tageblatt.

1911 Receives the Honorary Commendation of the Königlich-Sächsische Akademie der Bildenden Künste (Royal Saxon Academy of the Visual Arts) in Dresden.

1913 From August to November he studies life drawing at the Académie Filippo Colarossi, a private art school in Paris. Meets the French painter, Jules Pascin, whose spontaneous style of drawing he admires. Back in Berlin, he sees Italian Futurist and German Expressionist works in the "Ersten Deutschen Herbstsalon" (First German Autumn Salon) at Herwarth Walden's gallery, Der Sturm.

1914 The Reichstag votes unanimously to declare war. Grosz volunteers for the Army.

1915 In February he is hospitalized with a severe sinus infection and in May released as unfit for service. Meets the publisher Wieland Herzfelde in Ludwig Meidner's studio.

1916 Officially anglicizes the spelling of his name to George Grosz. Regularly visits the Café des Westens, the gathering place in Berlin of the artistic avant-garde. Begins work on the painting "Metropolis." Meets Eva Peter, his future wife, a fellow student at the Berlin School of Arts and Crafts.

1918 Exclusive contract with the Munich dealer Hans Goltz (who will represent Grosz until 1922). Makes Dada collages, some of them in collaboration with Heartfield. Grosz joins the Communist Party of Germany together with Erwin Piscator and the Herzfelde brothers. (He leaves the party in 1923, although he continues to attend meetings in the 1920s and contributes to the satirical Communist worker paper). Also joins the radical November Group of artists.

1919 During the so-called Spartacus revolution soldiers force their way into Grosz's studio with a warrant for his arrest. He escapes using false identity papers and goes into hiding for several days.

1920 First solo show in Munich. In May marries Eva Peter. Helps organize and contributes to the "First International Dada-Fair" in Berlin, which results in a legal suit for criticism of the Army ("I consider any art pointless if it does not put itself at the disposal of a political struggle," he would later write in his autobiography). The trial ends in 1921 with a fine.

1921 Solo show at the Kestner-Gesellschaft, Hanover. Publication of the collection of drawings Das Gesicht der herrschenden Klasse (The Face of the Ruling Class).

1922 Spends five months traveling in Russia with the Danish Communist writer Martin Andersen-Nexø. Meets Trotsky and Lenin. Growing disillusionment with Communism and the Soviet Union. Publication by Malik-Verlag of the portfolio Die Räuber (The Robbers).

1923 Publication of the portfolio and book Ecce Homo, from which thirty-four reproductions are confiscated. Grosz and the publisher Herzfelde are accused of pornography. The sensational trial ends in 1924 with a fine. Signs a contract with the dealer Alfred Flechtheim.

1924 Despite having left the Communist party the previous year, he becomes chairman of Rote Gruppe (Red Group), an association of Communist artists. Travels with Eva to Paris.

1925 Takes up oil painting again after a hiatus of several years. Participates in the Neue Sachlichkeit (New Objectivity) exhibition at the Kunsthalle Mannheim. Spends several months in France.

1927 Spends seven months on the French Riviera and develops a new style. Paints landscapes and still lifes in which he departs from the style of Neue Sachlichkeit.

1928 Seventeen drawings are published by Malik-Verlag in the portfolio Hintergrund (Background). Three of the drawings lead to a charge of blasphemy against Grosz and Herzfelde, which ends after many appeals only in 1931 with the defendants' acquittal. In September visits London.

1932 On April 26, Grosz receives a telegram inviting him to teach a summer course as a guest lecturer at The Art Students League in New York. He accepts to teach at the school, where he will do so intermittently until his return to Germany in 1959. Stays in New York from June to October. Together with the painter Maurice Sterne and the dealer Israel Ber Neumann opens the Sterne-Grosz Studio for the Art in Painting. He also becomes co-editor of the satirical magazine Americana. The New Yorker and Vanity Fair commission illustrations from him. Gets to know James Thurber, Erich Cohn, and George Gershwin. After he finishes teaching, he returns to Germany October 6.

1933 With the Nazis coming to power, Grosz decides to leave Germany for good. On January 31, SA troops storm into Grosz's flat in Berlin. He and his wife have been in New York for two weeks. Their sons follow in October. In March Hitler is given dictatorial authority. That same month Grosz is deprived of German citizenship. Teaches full-time at the Sterne-Grosz Studio and at The Art Students League. Lives initially at the Cambridge Hotel and finally settles in Bayside, Long Island until 1936. He receives further commissions from Vanity Fair.

1934 Devotes himself to watercolour painting, filling sketchbooks with scenes of New York life. Exhibition at the Mayor Gallery, London.

1935 From May to September, Grosz travels in Europe with his family. He illustrates the novel The Voice of the City by O. Henry, one of America's most popular authors. Illustrations by Grosz were printed in two issues of Art Front. Visits his mother in Denmark for the last time. Applies for U.S. citizenship.

1936 Grosz closes the Sterne-Grosz art school, which his partner left the previous year. Grosz receives his first commission for illustrations from the widely circulated Esquire magazine, whose short stories and articles are by famous American writers, such as F. Scott Fitzgerald and Morley Callaghan. The Museum of Modern Art includes Grosz in two group exhibitions at the same time, "Fantastic Art, Dada, and Surrealism" and "Modern Painters and Sculptors as Illustrators." The Whitney Museum of American Art invites him to participate in its biennial. Grosz moves to Douglaston, Long Island with his family where they will reside until 1947.

1937 Grosz is awarded the prestigious Guggenheim grant which is renewed the following year and allows him to work independently for two years. Though not well-off, Grosz takes in and supports several friends who have immigrated to the United States. In Germany, Grosz's work is prominently displayed in the exhibition "Entartete Kunst" (Degenerate Art). Two hundred eighty-five of his paintings and drawings in public collections are confiscated and many are destroyed.

1938 Becomes a U.S. citizen. Continues to have numerous illustrations published in Esquire.

1939 Grosz has one illustration published in Esquire. He quits the magazine.

1941 Retrospective at The Museum of Modern Art which later tours to venues throughout the United States. Teaches again for three years at The Art Students League.

1942 Interviewed on the radio program "Art Under Hitler," produced by CBS and The Metropolitan Museum of Art.

1943 The New Yorker publishes a three-part profile of Grosz by Richard O. Boyer.

1945 Grosz's mother and aunt die in a bombing raid in Berlin.

1946 Publication of Grosz's autobiography, A Little Yes and A Big No in New York. Growing depression and increasing alcoholism plague the artist.

1947 Moves to Huntington, Long Island. Offered a professorship at the Hochschule für Bildende Künste in Berlin.

1949 After a four-year respite, he is forced for financial reasons to resume teaching at The Art Students League and at the private art school in his house on Long Island. Over the summer, teaches at the Skowhegan School of Painting and Sculpture in Maine. Solo exhibition at the Cleveland Museum of Art.

1950 Work is shown again at the annual exhibition at the Whitney Museum.

1951 Grosz's older sister dies. Visits Europe from May to November for the first time after the war.

1954 Travels to Hamburg, Berlin, and South Germany. Visits Otto Dix. In London, designs sets for the film I Am a Camera based on Christopher Isherwood's collection of short stories, Goodbye to Berlin. Retrospective at the Whitney Museum of American Art. Made a member of the American Academy of Arts and Letters, New York.

1955 Publication of the original German version of Grosz's autobiography, which, unlike the American edition, is unabridged.

1956 Teaches at the Skowhegan School of Painting and Sculpture and lectures at the Des Moines Art Center.

1958 In Berlin from September to November. The National Gallery in Berlin acquires one of his major paintings Stützen der Gesellschaft (Pillars of Society).

1959 He and Eva sell their house, draw up their wills, and return permanently to Berlin in June. They move into a flat in Eva's parents' house. Only a few weeks after their return, following a night of drinking with friends, Grosz collapses shortly after midnight in the entrance hall. On July 6, he is found unconscious by neighbors in the morning and taken upstairs to the flat where he dies shortly after from heart failure.

George Grosz is buried in the municipal cemetery in Trakehner Allee, in the Charlottenburg district of Berlin.