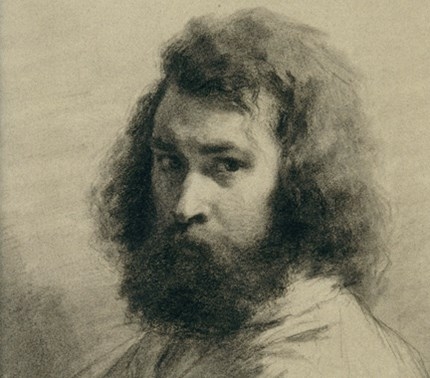 Heliogravure after a charcoal drawing of 1846 on wove paper

Jean-François Millet was born in 1814 in the Norman village of Gruchy, the eldest child in a large, closely knit family of farmers living in modest prosperity on their own land. His parents, religious and patriarchal, saw to it that he received a good education, which gave him a knowledge of Latin and a lifelong interest in literature. Having shown early signs of talent, the youth was sent to Cherbourg in 1833 to work with a local portrait painter, Bon Dumouchel (1807–1846). Two years later, he entered the studio of Lucien-Théophile Langlois (1803–1845), a former pupil of Antoine-Jean Gros (1771–1835). In 1837, provided with a stipend by the city of Cherbourg, Millet went to Paris, to enroll at the Ecole des Beaux-Arts as the pupil of the history painter Paul Delaroche (1797–1856), then at the height of his celebrity. After two unhappy years of study, Millet competed unsuccessfully for the Rome Prize, left his teacher, and lost his stipend. Back in Cherbourg, he set himself up as a portrait painter. One of his portraits was accepted for the Paris Salon of 1840, but another, commissioned by the city of Cherbourg, was returned to him as a poor likeness. Discouraged, Millet decided to seek better luck in Paris, where he established himself with his wife, the frail Pauline-Virginie Ono, barely twenty years old. His portraits of that time, modeled in hard contrasts of light and shadow (Portrait of Mademoiselle Ono, c.1841, Musée Thomas-Henry, Cherbourg), are indebted to the Spanish painters whose work he was able to study in the Galerie Espagnole at the Louvre. While he struggled for a livelihood, his wife contracted tuberculosis and died. Millet returned to Cherbourg in 1844 and here took as his companion a servant girl of eighteen, Catherine Lemaire. To reach a wider audience, he produced ingratiating bucolic idylls, using a technique of flecked touches of light color, his manière fleurie, a concession to a popular revival of rococo style to which his friend Narcisse Diaz de la Peña may have introduced him. Sensing the disapproval of his Cherbourg relations, he moved with his mistress to Le Havre and thence to Paris (1846), where he continued to woo the public with mildly erotic compositions. But in his drawings for them he already gave proof of greater energy and seriousness than was called for by these slight inventions (The Lovers, c. 1848, The Art Institute of Chicago).

Millet took no active part in the Revolution of 1848. At the unjuried Salon of that year, he exhibited The Grain Sifter (1847–1848, National Gallery, London), one of his earliest scenes of farm labor, which met with a favorable critical reaction. He now became acquainted with several of the artists who were to form what came to be known as the School of Barbizon, Théodore Rousseau 1812–1867), Charles-Emile Jacque (1813–1894), and the sculptor Antoine-Louis Barye (1795–1875). He also met Honoré Daumier (1808–1879) about this time, when both artists competed unsuccessfully in the contest for an allegorical painting of the Republic.

An outbreak of cholera in Paris prompted Millet in 1849 to join his new friends at Barbizon. From this time on, he devoted himself mainly to subjects from rural life. At the Salon of 1850–1851, his Sower (Museum of Fine Arts, Boston) attracted both praise and ridicule by its novelty in endowing farm labor with symbolic nobility. Popularized by countless reproductions, it came in time to signify Creative Man. In the following years, Millet continued to treat scenes of rural work in an elevated style. Harvesters Resting (1853, Museum of Fine Arts, Boston) cast its subject as a modern version of the story of Ruth and Boaz. At the Salon of 1857, The Gleaners (Louvre), a composition of grand dignity, nevertheless came under attack because some saw a subversive intent in its image of rural poverty. While the picture was on view, Millet received a commission from the American painter Thomas Appleton (1812–1884) for what was to become in later years his most famous painting, The Angelus (1859, Louvre). During the 1860s his work began to attract the attention of a widening circle of critics and collectors, not a few of them Americans. At the Salon of 1863 his Man with a Hoe (c. 1862, The J. Paul Getty Museum, Los Angeles) caused a controversy between indignant journalists who denounced this portrayal of an exhausted laborer as subhuman and cretinous and admirers who saw in it a tribute to stoic endurance of unrewarded toil.

Millet and his family lived as frugally as their neighbors. In 1863 Catherine gave birth to their ninth child. His breakthrough to success came at the Salon of 1864, where the youth and near prettiness of his Shepherdess Guarding Her Flock (Louvre) won the hearts of the public who concluded that he had at last overcome his addiction to scenes of misery and discovered charm. He was awarded a first-class medal. Landscape, which had played a minor role in his work, now came to dominate it. Unlike his fellow painters at Barbizon, he did not respond to the forests and rocky deserts of Fontainebleau, preferring man-made agricultural landscapes that perhaps reminded him of his childhood in Normandy. The area around Barbizon furnished him with a sparse repertoire of motifs which he enriched by recollections of Normandy and by studies gathered in the more varied, hilly countrysides of the Auvergne, where he made several stays in the 1860s for the sake of his wife's health. In some of his later landscapes there appears an undercurrent of emotional tension that disturbs their formal structure and foreshadows the turbulent late landscapes of Vincent van Gogh, an admirer of his work.

In his rural seclusion at Barbizon, Millet still maintained lively intellectual contacts with literary and artistic friends, read the classics, advised his friend and later biographer Alfred Sensier on questions of art, and formed a collection of engravings, medals, and ceramics. At the Paris Universal Exposition of 1867 he was impressively represented by nine paintings, among them The Gleaners and The Angelus, which had earned him the cross of the Legion of Honor in 1865. When war with Prussia broke out in 1870, he found refuge in his native Normandy, waiting out the siege of Paris and the civil war that followed. He refused association with the Commune and its Federation of Artists. Late in 1871 he returned to Barbizon. Through his dealer Durand-Ruel, who had immigrated to London, he sent paintings abroad for exhibition and sale in Europe and America. Their success signaled his acceptance by the international public.

Childhood memories, refreshed by impressions of his wartime stay in Normandy, furnished him material for many of the landscapes that he completed after his return to Barbizon (The Church of Gréville, 1871–1874, Louvre). Among his projects of the postwar years was the completion of a landscape cycle, begun in 1868, representing the seasons of the year in their natural and agricultural aspects (Spring, 1868–1873, Louvre). One of his last finished works, The Bird Nesters (1874, Philadelphia Museum of Art), was a nocturnal vision of torch-lit, violent action that contrasted strangely with the stillness of his earlier paintings of rural life. Ailing in 1875, he married his common-law wife in accordance with the rites of the church (a civil wedding had been performed in 1853). He died on 20 January and was buried in the churchyard at Barbizon, beside Théodore Rousseau.

Because it dwells on an aspect of social reality, the lives of peasants, Millet's work is usually assigned to the current of nineteenth-century realism. But in its treatment of that reality it is neither strictly modern nor visually objective. Guided by memories of art, Millet idealized the condition and appearance of the French peasantry. Like Daumier, he had an eye for statuesque corporeality and for the telling gesture, but while Daumier's stylizations accentuated the individual, Millet limited himself to the typical. His modernity and originality lay, not in his choice of subjects, nor even in the depth of feeling he brought to them, but in his formal qualities, the power of his drawing and the boldness of his pictorial invention.

[This is the artist's biography published in the NGA Systematic Catalogue, https://www.nga.gov/collection/artist-info.1720.html]